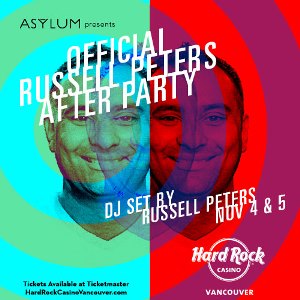 Fans of Russell Peters – who is currently on the road with his Almost Famous World Tour which includes a three-night residency at Hard Rock Casino Vancouver – will have the chance to get even more up-close and intimate with the comedy icon when Asylum presents the Official Russell Peters After Party on November 4 & 5, 2015.

It was in the late 80’s when Russell first began DJing while living in Toronto … a career which supported him during the early days of his comedic rise. Since then, he has performed DJ sets worldwide. The self-proclaimed “hip-hop junkie” will throw down an exclusive one-hour DJ set with DJ Spinbad inside Asylum following both his Wednesday night show and Thursday night show. A highlight of the Vancouver music scene, DJ Flipout is best known for his gig on the Beat 94.5, where he remixes the hits live in studio for The 5 O’clock Traffic Jam. But don’t let the respectability of a steady job fool you, this Vancouver DJ is an internationally renowned music buff whose eclectic and cosmopolitan style has won him many local and national MC and DJ competitions. DJ Flipout will be opening in Asylum at the Official Russell Peters After Party.