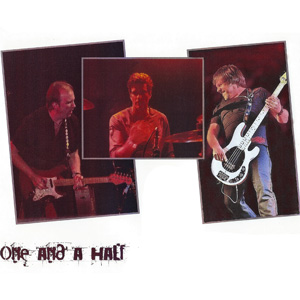 One and a Half

One and a a Half is an established classic rock band that features three veterans of the lower mainland’s rock scene. Ian Moncur is the leader and founder of the band.He moved here from the island in the early eighties to rock the nightlife with bands such as Tight Squeez,and Dig. Mark Kenny holds down bass and vocal duties and has also played 9 years with Nick Gilder and Sweeney Todd. Lance Chalmers rounds out the band on drums and played for Trooper for 8 1/2 years. Together the boys have created a tight, punchy rock trio that people continue to enjoy dancing and listening to all over lower mainland venues.