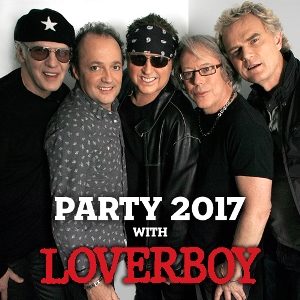 Canadian icons Loverboy will rock in the New Year at the Molson Canadian Theatre at Hard Rock Casino Vancouver on Saturday, Dec. 31, 2016.

Their string of hits include “Turn Me Loose,” “The Kid is Hot Tonite,” “When It’s Over,” “Hot Girls in Love,” “Queen of the Broken Hearts,” “Lovin’ Every Minute of It,” “This Could Be the Night,” “Heaven in Your Eyes,” “Notorious” and their mega-party anthem, “Working for the Weekend.” In 2009, they were inducted into the Canadian Music Hall of Fame. Aside from Reno and Dean, the group’s line-up also consists of original members Doug Johnson and Matt Frenette along with Ken “Spider” Sinnaeve who joined in 2001.

Tickets go on sale on Friday, Oct. 21 at 10 a.m. and are $149.50 (plus service charges) – Cabaret Seating with Premium Buffet, Dance Floor, Champagne Toast at Midnight & Party Favours and $99.50 (plus service charges) – Balcony Seating with Champagne Toast at Midnight & Party Favours. For more information and to purchase tickets, go to HardRockCasinoVancouver.com.