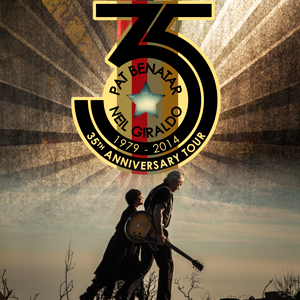 Four-time Grammy winner Pat Benatar and guitarist-songwriter Neil Giraldo will be thrilling fans across North America with their just announced 35th Anniversary Tour which will include a date at the Hard Rock Casino Vancouver on Friday, August 1, 2014.

It was in 1979 when the two collaborated on her debut album, In the Heat of the Night which reached #12 on the Billboard 200 albums chart. Since that time, they have sold more than 25 million albums and charted nineteen Top 40 singles including “Heartbreaker”, “We Live For Love”, “Hit Me With Your Best Shot”, “Promises In The Dark”, “Love Is A Battlefield” and “We Belong”.

Giraldo is also well-known as a prolific producer having produced all of Benatar’s albums along with other artists including Kenny Loggins and Rick Springfield. Benatar often refers to her husband as “The Big Kahuna” and the name fits as he is the major reason that her music sounds the way it does … both in the recording studio and on tour. “We’re excited to be celebrating this personal and musical milestone,” Benatar said. “The summer tour should be an incredible shared experience with the audience.”