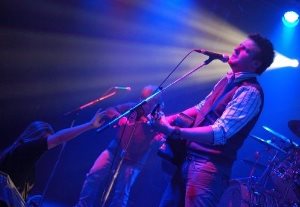 Paul made the decision to pursue music professionally after an interesting story unraveled on his 23rd birthday, which led him to work with a local producer and music industry mentor. If you want to hear a good piece of folklore, just ask Paul about the night he was performing in a small club when some guy claiming to be John Mellencamp wandered in and asked if he could hop on stage to play a few tunes.

Word travels fast in a small town. The following morning Paul was invited to a local radio station to share the story of his bizarre encounter. During that visit Paul ended up playing one of his songs on-air and the DJ was so impressed by his song, performance and charisma that the two soon formed a production relationship together, which resulted in the release of Filek’s first three albums.

In 2013 Paul Filek is focusing on his full time music career more intently than ever. With a finely crafted new EP under his arm and a full tank of gas, Paul delivers fun and engaging live performances with a sense of humor and storytelling that his fans can’t resist.