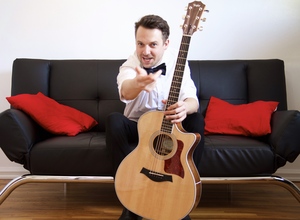 Saturday at ASYLUM with Paul Filek

Celebrate the Easter long weekend at ASYLUM on Saturday, April 16 with Paul Filek!

Paul Filek is a full functioning, Top 40 Party Act. Backyard BBQs, Weddings, Corporate Events, Birthday parties, Paul does it all! No matter the location, no matter the occasion, Paul is the guy for you! Let him be the soundtrack to your next great event. Paul plays high-energy Top 40 hits of the ages with a focus on current pop. You’ll hear Anything from Beatles to KOL, Selena Gomez to Tom Petty, Maroon 5 to CCR. Paul Filek is also a Canadian Singer-Songwriter from Kamloops, BC who’s released three albums since 2006 with Producer Henry Small (Formerly of the Band Prism) and most recently a five Song EP, Paper Planes And Spare Change, Produced by Jeff Dawson (Daniel Powter, State Of Shock, The Dudes). One thing that’s certain is that Paul’s confident, accomplished songwriting and performing are commercial in their appeal, as evidenced by his charting success on Canadian Radio. His smooth and effortless, funky vocals and heart-on-the-sleeve lyrics are infectiously hard to deny. His feel good songs fit perfectly sandwiched between Maroon 5 and Train. You can find Paul on a nightly basis performing at some of Vancouver’s Hottest and most vibrant Lounges. Using a Looper Pedal he creates a live on stage Band to accompany him using only his Guitar, Vocals, and imagination.