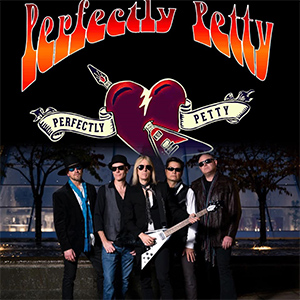 Dave Danylchuk is quickly emerging as one of North America’s premier Tom Petty Tribute Artists. Recent performances include multiple festival appearances such as Penticton Peachfest, Vancouver Island Exhibition, Headline Tribute Theatre Shows at several Vancouver Island Theatres and The Rio Theatre in Vancouver BC as well as multiple sold out Shows at the Blue Frog Studios. His undeniable likeness has garnered him representation with National and International talent agencies.

Dave D performs in all variations of production: Full Band Heartbreakers experience, Small groups (duo or trio) or Solo Show, acoustically or with full production back tracks. In addition to the straight Tom Petty Tribute show, Perfectly Petty also offers “Jamming With Giants” a Tom Petty ICONS And INFLUENCES Experience available for Theatre Venues or Corporate Events. This show features a review of the Tom Petty musical journey beginning when Petty was a teen, inspired by the likes of The Beatles, The Byrds, and Elvis, and evolving to include his collaborations with the likes of greats such as George Harrison, Bob Dylan, The Travelling Wilburys, Stevie Nicks and more.

Also available is a corporate add-on set featuring hits from the golden era of “New Wave”. During this period of the late 70’s/early 80’s, Tom Petty and The Heartbreakers were at the forefront of a pack of groundbreaking new artists including The Cars, The Police, Talking Heads, Joe Jackson and others of the era. In less than a year, Dave has established himself as a true “Dead Ringer” in Look, Style, Sound, and Performance. He has thrilled and transported audiences with his ability to honor and channel the artist whose music touched millions of people worldwide for decades. Dave D embodies the spirit of Tom Petty and performs
with a connection to the Heart of rock and roll that Tom Petty was integral in cultivating.