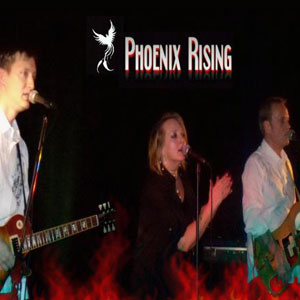 Lead vocalist, Jamie Lynn Donald began singing at the age of 8 and has toured extensively throughout Canada and the US, recorded in Nashville and shared the stage with such legends as George Jones and Valdy. Bass player and vocalist, Jim Larsen, grew up in Ontario and played bass with Juno nominated Toronto based Epic recording artists, Hellfield, who released three major albums and shared the stage with artists like The Cars, Triumph, Max Webster, April Wine, Chilliwack and the Little River Band. Guitarist Darren Slavik, toured Western Canada with Shanghai for five years. He backed up such legends as Dr. Hook, Chilliwack and Doug N the Slugs. Together, this trio of veteran musicians come together to
form: Phoenix Rising

They will keep the dance floor full and the good times rollin’!