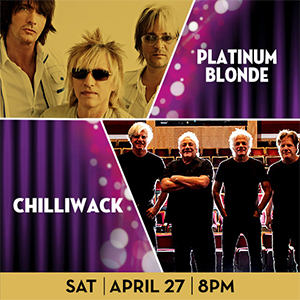 Coming to and sharing the Molson Canadian Theatre stage, Platinum Blonde and Chilliwack will be bringing their biggest hits to Hard Rock Casino Vancouver on Saturday, April 27.

Platinum Blonde is back, but don’t call it a reunion. In reality, it’s more like the band has simply taken a finger off of the pause button. Even with four albums that have collectively gone Platinum seven times over and garnered multiple Juno Award nominations, along with an induction into the Music and Broadcast Industry Hall of Fame, the appetite for their signature new wave rock sound, that swept up throngs of fans, has hardly waned since the boys pressed pause in 1991.

On the other hand, rising out of the ashes of psychedelia in 1969, Canada’s legendary Chilliwack released 12 albums over a 15 year period producing numerous Canadian and international hits including “Lonesome Mary”, “Fly At Night”, & “California Girl.” All this work led to fifteen gold and platinum certifications, a host of awards, high profile TV appearances and coliseum concert tours. Chilliwack’s reputation for consistently powerful shows continue and hearing the revitalized Chilliwack of today is like hearing those songs for the first time… all over again.

Don’t miss out on this rare opportunity to see both bands take over and rock the stage. Tickets go on sale on Friday, February 22 with prices starting at $49.50 (plus service charges).