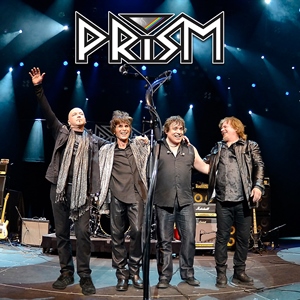 NASA chose Prism’s “Spaceship Superstar” as the official song aboard Space Shuttle Discovery during its historic final flight, which speaks to Prism’s ongoing popularity, even in outer space! Meanwhile, back on earth:
They’ve sold millions of albums, with songs that have become radio standards – Spaceship Superstar,
Take Me to the Kaptin, Flying, Armageddon, Take Me Away, Young & Restless, Night to Remember,
Don’t Let Him Know among them. Prism itself is classic rock.

With two Juno Awards (Canada’s Grammy) for Album & Group of the Year, multi-platinum albums and a continuing legacy of sold-out shows, Prism is a must-see live attraction. The band rocks out the hits more energetically than ever, thrilling audiences nationwide.

Every day across the country, radio is playing the many Prism classics. Combine unstoppable world-class concerts, and the best may be yet to come.