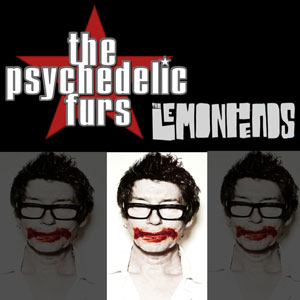 The Psychedelic Furs & The Lemonheads

The Psychedelic Furs will be returning to the road this fall with The Lemonheads as their special guests. The just announced North American tour will kick off at the Hard Rock Casino Vancouver on Tuesday, October 21, 2014.

Founded by frontman Richard Butler and his bass-wielding brother Tim, The Psychedelic Furs came together in the wake of the explosion of England’s punk rock scene in 1977. The band went on to release such chart-toppers as “Love My Way”, “The Ghost In You”, “Heaven”, “Pretty In Pink”, “Heartbreak Beat”, “All That Money Wants”, “House” and “Until She Comes”.

Led by musician Evan Dando, The Lemonheads were formed in Boston in 1986 and achieved mainstream success with several hits including “Into Your Arms”, “If I Could Talk I’d Tell You”, “It’s A Shame About Ray”, “Confetti” and “My Drug Buddy”.