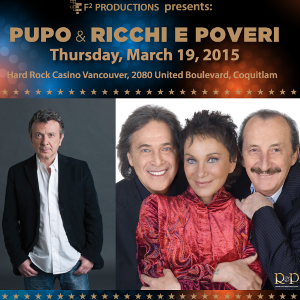 Enzo Ghinazzi (born 11 September 1955 – Ponticino, Arezzo, Italy), more commonly known as Pupo, is an Italian Pop singer and lyricist. His first single, “Ti Scrivero” came out in 1975 and began a path to worldwide success that would lead to several hit albums such as Su di noi, Ciao, Lo Devo Solo a Te, Forse, Un Amore Grande, among many others. His records have been heard around the world and have been translated into English, German, French and Spanish. With over twenty million albums sold throughout the course of his career, Pupo has received 11 gold records and with the album Piu’ di Prima, he also won the Gondola d’Oro in 1981. He has participated in four Festivals of Sanremo (1980-83-84 and 1992) in which he was always classified among the top performers.

Ricchi e Poveri is a very well known pop music group from Italy. It was formed in 1967 by Franco Gatti, Angela Brambati, Angelo Sotgiu and Marina Occhiena. (Occhiena left the group in 1981)

Their first public appearance was in Cantagiro 1968 with L’ultimo Amore. Ricchi e Poveri has participated in Sanremo Music Festival several times since 1970. In the 1980’s they shifted towards a much more dance oriented music and in1985 they won first prize at Sanremo with “Se M’Innamoro”.

Ricchi e Poveri has recorded in Italian and Spanish and the group had some of the most popular Italian songs of the 1980s and 1990s, including “Mamma Maria”, “Se M’innamoro”, “Made in Italy”, “M’innamoro di te”, “Voulez-vous Danser” and many others that other artists have also covered.