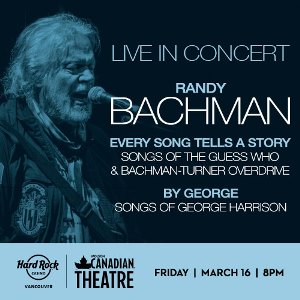 Few artists can claim to have a bigger impact on popular music than Randy Bachman, widely regarded as the “architect of Canadian rock ‘n’ roll.” His renowned songwriting acumen produced “American Woman,” “Taking Care of Business,” “These Eyes” and many other tracks that have become pop-culture touchstones.

Now, in addition to his ever-popular songs and the stories behind them, Randy brings to the stage an exciting production honouring the remarkable musical legacy of early mentor, hero and inspiration, Beatles guitarist and songwriter, George Harrison. From one master musician to another, Randy offers his own uniquely personal interpretations of Harrison’s best-known songs in an extraordinary concert experience that you don’t want to miss. Randy performs at Hard Rock Casino Vancouver on Friday, March 16, 2018.

Tickets go on sale Friday, December 8, with prices starting at $79.50 (plus service charges).