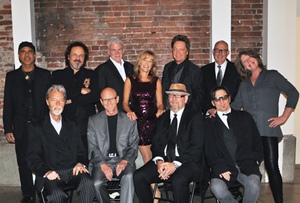 The R&B Allstars formed in the late 70’s as a testament to our love of Classic R+B. The original band, with signature white tuxedos, first opened for Long John Baldry at Ohara’s. At this gig, the band was seen by Harry Brandolini, of No. 5 Orange, and he had an idea that the Allstars and the “5” would be a great weekend fit. Harry hired us, and the line-ups began, as did the curiosity. We were featured on local news, radio and TV shows. Many writeups by people such as Tom Harrison only helped our popularity. We soon became a fixture in the Vancouver night life scene, and also opened for touring acts that came to town. Many Jazz and Blues festivals followed. We were a fixture on Whistler long weekend holidays at Buffalo Bills. The Allstars recordings include Choo Choo Choo Boogie, Ain’t that a lot Of Love, Crazy Mama, Satisfaction, and an original, You’ve Got to Make up Your Mind. With great support from local radio, the band created a following that endured for well over a 20 years. More than 30 members have come and gone, including some of the best Vancouver talent. The current Allstars features members from the past and present. We have relaunched this band for same reason we did in 1978. Because we love it!