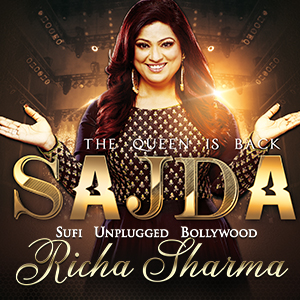 Calling her a ‘Complete Singer’ is probably the most appropriate way to describe Faridabad born RICHA SHARMA, who has been impressing audiences around the world since 1994. TV Host, Reality TV Show Judge and a singer par excellence, Richa can sing Sufi, Geet, Gazal, Folk, Shabad, Bhajan, Qawwali & Bollywood songs with such ease that many rate her as one of India’s finest and this diversity has won her admirers in & outside India. With three widely admired albums Ni Main Yaar Nu Sajda Kardi, PIYA & Winds of Rajasthan, Richa has made quite a name and with songs like #TeraSajda… & #MereMaula… she’ll be paying an homage to His Highness Aga Khan at the Vancouver concert.

Richa Sharma’s upcoming #SAJDA : #RichaSharmaLive2019 is her humble tribute to all music fans and the ‘Sufi Queen’ will showcase her powerful vocal chords like never before with sufi renditions of famous masters in the months of June & July, 2019. KVP Entertainers, who are celebrating 25 years in concert promotion and recently hosted singer NEHA KAKKAR at Vancouver’s Queen Elizabeth Theatre, are presenting the versatile singer on Saturday, June 15nth,2019 at The Show Theatre at Hard Rock Casino Vancouver in Coquitlam, with tickets at $35, 55, 75, 100 & VIP available at Kamal’s Video Palace, Surrey (www.kvpentertainers.com) or www.ticketmaster.ca and more information can be obtained from KAMAL SHARMA at (604)592-9777 or (604)833-1977