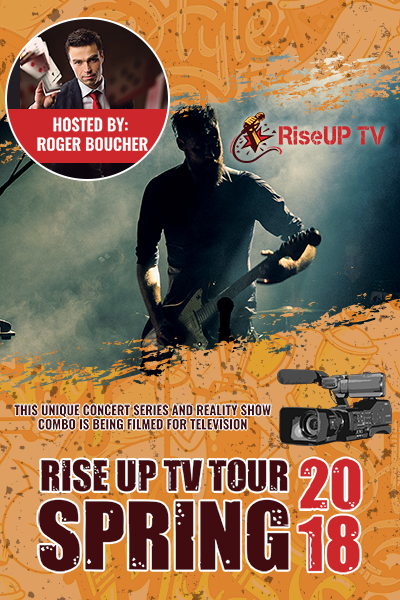 “RiseUp TV” is a globally distributed TV show, introducing the world to the personalities, sights and sounds of artists of all genres and ages from Canada, the US and Europe!

The 12 episodes will be largely constructed from footage obtained during the massive undertaking of a 12 city tour starting on May 20, 2018, in Victoria,B.C. and ending in Montreal, QC on June 2, 2018. The spectacle is made even more insane by the mode of transportation for the artists. The artists will be travelling in a chartered bus together and going coast to coast, performing at the shows along the way.

The evening is hosted by hypnotist / Magician Roger Boucher and will be approximately 2.5 hours each night. The footage collected from the shows, bus trip, hotels and adventures along the way, will be assembled into 12 episodes, with the goal of also highlighting each city along the way, with it’s own episode!

This will be not only a great example of life in today’s music industry, but a tremendous avenue to promote the beauty and landmark’s of each city involved!