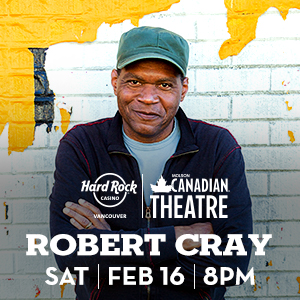 Robert Cray has been bridging the lines between blues, soul and R&B for the past four decades, with five Grammy wins, a Blues Hall of Fame inductee, recipient of the Americana Lifetime achievement award, countless tours and over 20 acclaimed albums.  Growing up in the Northwest, Robert Cray listened to the gospel of the Five Blind Boys of Mississippi, Bobby Bland’s soul, Jimi Hendrix’s rock guitar and the Beatles pop sounds. He would bring all of the influences into play throughout his career, but his teenage band was captivated by Southern Soul and the blues.

With the group’s 1980 debut release, Who’s Been Talkin’, word about the Cray Band began to spread across the Northwest and down into California. Blues and soul fans showed up religiously, but their steamy raucous sets also drew crowds whose tastes in music ranged from rock to funk and jazz. Catch this spectacular performance for yourself live. Tickets go on sale on Friday, November 16, 2018 at 10AM and are $59.50 and $69.50 (plus service charges).