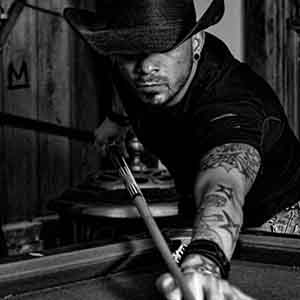 Rod Black grew up on the classics. From Southern Rock Pioneers Lynyrd Skynyrd, to the original outlaws: Willie Nelson, Waylon Jennings & Mr. Johnny Cash. He was Signed by LA Reid & Island/DefJam records in 2007-2010 with his band Jet Black Stare.

Last year found him hot off the rise of his Top #20 debut hit, “Keepin’ On” (Canada country billboards). Black was nominated at the 2015 Canadian Music Week for Best New Group or Solo Artist (Country) for the song. At the 2015 British Columbia Country Music Association Awards, Black was nominated for Rising Star. Rod was also left with a notch in his belt for his performance at Merritt’s Rockin River Fest – joining a legendary lineup of national acts, including Lady Antebellum, Dierks Bentley, Chris Young, Big & Rich, and Dallas Smith, to name a few. The second solo single, “Long Gone”, was released in March 2015.

2016’s seen that momentum channeled into the studio – writing and recording songs for the upcoming EP. Rod’s just released TWO new music videos, “Miles to Go” & “Go Big or Go Home,” — and with over 100K listens in the first week, we know one thing for sure: Rod Black is on the rise!

Catch Rod at 2016’s Rockin’ River Fest in Merritt — and stay tuned for “Miles to Go” on your local station…As always, he thanks you sincerely for your support and hopes to see you this summer!