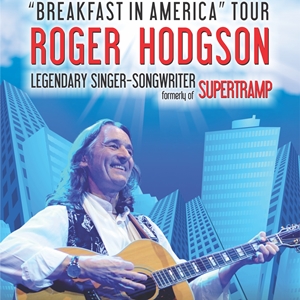 Grammy Award-winning singer, songwriter & musician Roger Hodgson has added a date to his “Breakfast in America” World Tour and will be performing at Hard Rock Casino Vancouver on November 27, 2015.

It was in 1969 when the Oxford-born Hodgson co-founded the progressive rock band Supertramp with musician Rick Davies. Hodgson wrote and sang most of the group’s classic hits that brought them worldwide acclaim selling over 60 million albums through the 70’s and the early 80’s. Their hits include “Dreamer”, “Give a Little Bit”, “Fool’s Overture”, “The Logical Song”, “Breakfast in America”, “Take the Long Way Home”, “Lord is it Mine” and “It’s Raining Again”.

Hodgson left the band in 1983 releasing his debut solo album, In the Eye of the Storm the following year. The album sold over two million copies and earned Platinum certification in Canada. He went on to release additional albums with his most recent album, Classics Live released in 2010.

Today, Hodgson still enjoys performing the songs he wrote and sang while with Supertramp to sold-out venues across the globe. His 2015 tour will include dates in not only Canada and the US but in Germany, Austria, Hungary, France, Spain, Belgium, Holland and the UK as well.