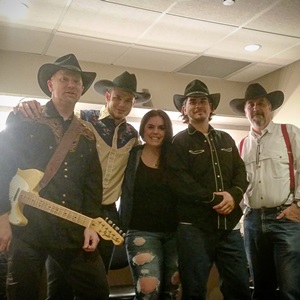 Rowdy Spurs are an authentic, traditionally influenced country music band, officially formed back in October 2014. They placed first runner up for the 2016 Rock The Mic contest performed at the Molson Canadian Theatre in the Hard Rock Casino. As the only country band ever to make the finals, in four years of running this contest, this is their greatest accomplishment thus far. Being nominated for the 2016 Traditional County Music Award by the BC Country Music Association (BCCMA) was their biggest honour. Making their rounds through every city and town around, Rowdy Spurs are creating a huge impact on the local country music scene.

They all share the same love for classic country music by the legends George Jones, Merle Haggard, Hank Williams Jr, Waylon Jennings, Johnny Cash, and more. Many members have come and gone over the years but the core members have remained strong through thick and thin. Singer/songwriter Kyle Hensby is a blue collar outdoorsman who has found his only salvation through writin’ and singin’ country music. The only Spurette in the band, Justine Lynn, is a beautiful young talented singer with a voice of a honky tonk angel, together contrasting a beautiful duo. Whiskey Thumper, Josh Wingert is the man who keeps that walking bass line right on track like a freight train comin’ down the line. Speed shooter and drummer Kevin Lee is the fastest gun in the band, who competes in competitions on the regular. The newest Spur is the amazingly talented Les Toth, lead guitarist and mentor to the band who can play that chicken pickin’ like no other around.

Keeping the traditional country music scene alive through the roots of the legends who paved the way while honoring their deserved recognition. Banded together, we are the Rowdy Spurs.