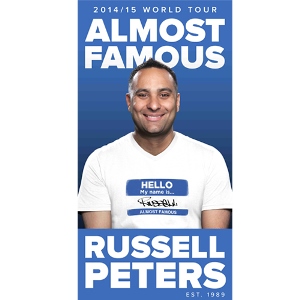 Canada’s #1 stand-up export, Russell Peters is once again getting ready to hit the road for his Almost Famous World Tour which will include dates at Hard Rock Casino Vancouver on November 4, 5 & 6, 2015 and at River Rock Casino Resort on November 7, 8 & 9, 2015.

Russell has spent over the past twenty-five years building a career where he’s become one of the biggest comics in the world. He has sold out arenas from Madison Square Garden to the Sydney Opera House and has also performed for the troops in Afghanistan, Iraq and on the USS Eisenhower and HMCS Winnipeg.

He has made countless television appearances on the late-night talk show circuit and just last year, he joined NBC’s Last Comic Standing as one of the show’s judges. His film credits include roles in Source Code, Breakaway and Chef while his 2010 memoir, Call Me Russell reached #1 on The Globe and Mail Bestsellers List.

With Russell bringing his tour to both casinos’ Show Theatres, fans will now have the opportunity to enjoy his hilarious, no-holds barred brand of stand-up and his signature lighting fast improv with the audience in an up-close and intimate setting. Also joining Russell on stage will be his Official Tour DJ, New York City’s DJ Spinbad.