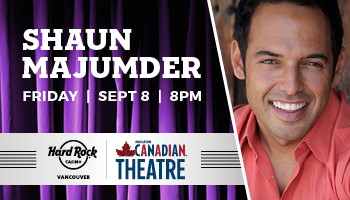 Gemini Award-winning actor-comedian Shaun Majumder will be bringing his hilarious stand-up to the Molson Canadian Theatre at Hard Rock Casino Vancouver on Friday, September 8, 2017. Majumder has also enjoyed a successful stand-up career having starred in his own Comedy Central Presents special and having appeared regularly at Montreal’s Just for Laughs Comedy Festival. He continues to perform to sold-out audiences across Canada.