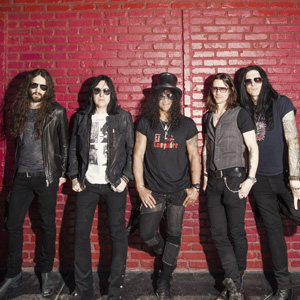 Grammy-winning guitarist-songwriter Slash and his bandmates Myles Kennedy and The Conspirators will be rocking the house at the Hard Rock Casino Vancouver on Friday, August 15, 2014.

Slash – who has amassed album sales of over 100 million – is famous for creating the signature sounds and guitar riffs on Gun N’ Roses’ #1 hits, “Sweet Child o’ Mine” and “Welcome to the Jungle”. TIME Magazine ranked him #2 – just behind Jimi Hendrix – on their “10 Greatest Electric Guitar Players of All Time” list.

It was in 2010 when he landed on top of the charts with his self-titled debut album followed by his 2012 album, Apocalyptic Love which earned him his first-ever #1 solo hits, “You’re A Lie” and “Standing in the Sun”. The third single, “Anastasia” reached the Top 5 on Billboard’s Mainstream Rock chart while the album skyrocketed to #4 on the Billboard 200 albums chart. Currently Slash and the band are in the studio at work on a new album set for release in September.