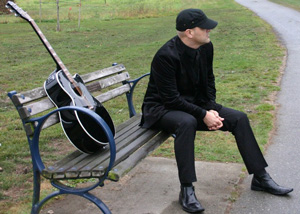 Classified as a premier Canadian “Acoustic Live Looping” Artist, with one Album “All The Pieces” (released 2013) and 2 popular Youtube videos, Spirit has developed a unique LIVE PERFORMANCE method in which he uses an acoustic guitar and live digital technology. Currently in the studio, Spirit is creating another album which will include some familiarity to some….

At a very young age, Spirit (formerly James) would pick up any instrument, study it as much as a young child could, and discover the basics of it. Sticking with the basic fundamentals of guitar, bass and drums, he dove into the uncharted waters of these instruments, and developed many skills and techniques over time. Moving into his teens, he “sat-in” with his first band at a local pub, and from there, was hooked on the electric string instruments. He was in and out of many local bands and groups throughout the 2000’s, and with a talent for vocals, created a mentorship platform to study a wide array of music – while keenly looking towards the technical talent of the many mentors he would be performing with. Blessed with a 70’s Les Paul Custom Sunburst at the ripe young age of 16 (from his father), he studied alternative and popular rock, soul, blues, and funk, which later served as a backbone to his signature Acoustic Live Looping peformance.

Without an orchestra, band, or pre-recorded / pre-programmed music, the audience follows the creation of a song, piece by piece – you hear EACH INSTRUMENT/SECTION performed INDIVIDUALLY RECORDED LIVE for the first time, using modified live-loop-technology. Unlike a keyboard type of one man band with pre-recorded tracks, all sounds come from an acoustic guitar (percussion, bass, guitar) and microphone (vocals), so every audience listens to the personal organic touch. His classification is “Acoustic Live Looping Artist”, differentiating from artists in the “rapping” or “mouth beat” category. Rather than using tracks on a computer or large sounding effects that follows a prerecorded algorithm, Spirit performs guitar, bass and percussion (all live) with his modified acoustic guitar, adhering to obtain the expression from the heart to the acoustic string, and vocally the the microphone. His performance context is “organic” in nature.

Performing with many talented local bands, and carving an individual technique as a Lead Vocalist, Bass Player, Lead Guitarist, and Percussionist – while touring through Canada, the UK, Japan and throughout the U.S., Spirit performs a dynamic range of popular genres, including soul, rock, rock-alternative, funk, and contemporary / popular music. Credits include performing and warming up for with many artists – including members from Trooper, Prism, Poetic Justice, Rhymes With Orange, 54-40, and performing with guitar greats such as Don Alder, Martone, and Tom Hooper from “The Grapes of Wrath”…