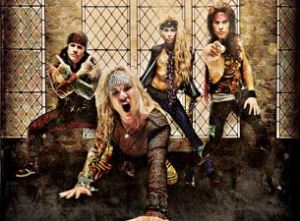 Glam-rock parody band Steel Panther will be bringing their “All You Can Eat Tour” to Hard Rock Casino Vancouver on Friday, October 23 and Saturday, October 24, 2015.

Hailing from Los Angeles, Steel Panther have been rocking audiences since 2000 releasing their major label debut, Feel the Steel in 2009. The group has performed to sold-out venues worldwide including London’s Wembley Arena just last month. They have also made numerous television appearances and have been joined on stage by such rock icons as Steven Tyler of Aerosmith and Paul Stanley of KISS.

Last year, they opened for Judas Priest on their North American tour. Currently the band is touring in support of their most recent album, All You Can Eat which bowed at #24 on the Billboard 200 and garnered them their third consecutive #1 album on Billboard’s Top Comedy Albums chart. Steel Panther consists of frontman Michael Starr, guitarist Satchel, bassist Lexxi Foxx and drummer Stix Zadinia.