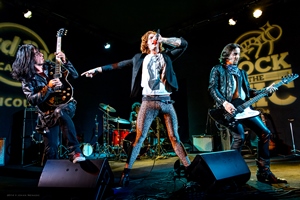 STRIP is an original Canadian based rock ‘n’ roll band. STRIP has already broken some barriers in the Vancouver music scene by performing many shows in well known venues in the downtown core such as The Roxy, The Railway Club, Fan Club, and Joe’s Apartment. STRIP also came in 2nd place in the Rock The Mic competition and signed a contract with Vancouver Hard Rock Casino. STRIP has only been around for a short period of time, but has gained popularity quickly due to there shocking and highly energized stage appeal which includes guitar smashing, confetti canons, and dancers. STRIP has also opened up for Todd Kerns of Sin City Sinners, The Conspirator’s (Slash’s band) and has worked with members of the band Hedley in Vancouver. These four dynamic musicians all share the same goal of creating grassroots rock ‘n’ roll.