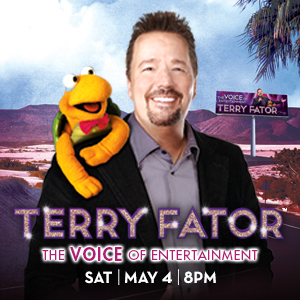 For the past nine years Terry Fator has sold out night after night at the Mirage Hotel with a show featuring his cast of characters that includes everyone from an Impersonating Turtle to Elton John, Elvis to Michael Jackson and Justin Timberlake to President Donald Trump.

In addition to winning America’s Got Talent, Terry has won Las Vegas’s best show, best all-around performer, best family show and best overall show.  What’s next for Terry Fator? He sums it up this way: “I just always want to entertain. That’s it. I never had fans before and now that I do I just want to keep them smiling and laughing.”  Terry Fator appears at Hard Rock Casino Vancouver on Saturday, May 4, 2019.