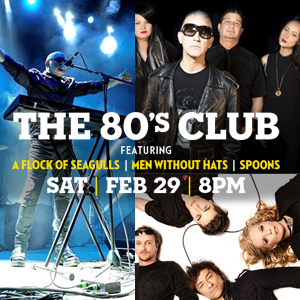 A Flock of Seagulls were one of the leading movers of the 1980’s new wave era. Known for their bizarrely teased hair, as much as their hit single “I Ran (So Far Away),” A Flock of Seagulls solidified their place in music history with “Wishing (If I Had a Photograph of You),” “Space Age Love Song,” and “The More You Live, The More You Love.”

Men Without Hats have been creating iconic, irresistible music for decades. Thirty years ago, they told the world “We can dance if we want to” with their hit “Safety Dance.” A few years later, they said to go “Go pop” with the smash “Pop Goes the World.” Although a lot has changed in music over the years, the Men Without Hats still deliver tracks that get fans moving across the dance floor.

The Spoons helped define the sound of pop and new wave in the 80s with hits “Nova Heart,” “Romantic Traffic,” “Old Emotions,” and “Tell No Lies.” Their album Arias & Symphonies was named one of the 20 Most Influential Albums of the 80s by Chart Magazine and “Nova Heart” was included in Bob Mersereau’s book Top 100 Canadian Singles.

Tickets for A Flock of Seagulls, Men Without Hats and Spoons go on sale Friday, September 6, 2019, with prices starting at $39.50 (plus service charges).