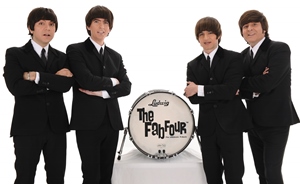 The Fab Four - The Ultimate Tribute

The Emmy Award-winning Beatles tribute show,  The Fab Four – The Ultimate Tribute – which has been hailed as “the best Beatles tribute ever” – is coming to the Molson Canadian Theatre at Hard Rock Casino Vancouver on Friday, September 9, 2016.

Founded in 1997, the California-based group has been performing their critically acclaimed tribute worldwide including Australia, Brazil, France, Germany, Hong Kong, Japan and the UK. The show’s  popularity stems from its record-perfect live performances of  such Beatles classics as “Twist and Shout”, “Can’t Buy Me Love”, “Yesterday”, “A Day in the Life”, “Hey Jude” and “Here Comes the Sun”.

In addition to replicating the Beatles’ sound, the show also goes above and beyond to look the part. The musicians who take on the on-stage personas of John, Paul, George and Ringo emulate the actual Beatles so perfectly that the right-handed musician who portrays Paul learned how to play bass left-handed to honor the legend’s talents.

The show also includes three costume changes to embody every era of the Beatles’ ever-changing career.

In 2013, the group received an Emmy Award for their TV special, The Fab Four – The Ultimate Tribute which aired on PBS.