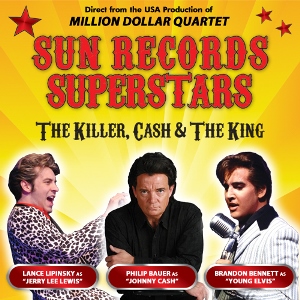 The Killer, Cash & The King

Sun Records Superstars: The Killer, Cash & The King will be coming to the Molson Canadian Theatre at Hard Rock Casino Vancouver on Thursday, November 10, 2016.

It was on December 4, 1956 when an unique event occurred … an event that was to become music legend. A impromptu jam session took place at Sam Phillips’ Sun Records Recording Studio in Memphis that featured Carl Perkins, Jerry Lee Lewis, Johnny Cash and Elvis Presley.

It was a session that seems to have happened by pure chance after all four Sun recording artists dropped by to pay Phillips a holiday visit at the same time. When Elvis wandered over to the piano and began playing a Christmas tune, the others joined in and the jam session then began. Jack Clement was the sound engineer that day and remembers thinking to himself, “I’d be remiss not to record this” so he did and the rest is music history.

Sun Records Superstars: The Killer, Cash & The King pays tribute to that legendary Sun Records recording session and as well includes many other songs which have stood the test of time. The show stars Lance Lipinsky as “Jerry Lee Lewis”, Philip Bauer as “Johnny Cash” and Brandon Bennett as “Elvis Presley” … all of whom capture the same provocative appeal with impeccable authenticity and respect.