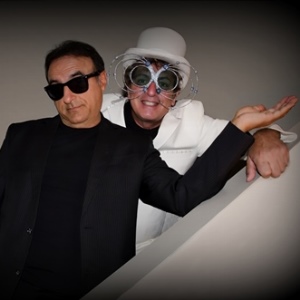 The Legacy - Featuring the Music of Elton John & Billy Joel

The Legacy – Featuring the Music of Elton John & Billy Joel will be coming to the Molson Canadian Theatre at Hard Rock Casino Vancouver on Saturday, August 6, 2016. The critically acclaimed tribute show salutes two of the greatest performers of our time.

Taking on the role of Elton John is singer, songwriter and multi-instrumentalist Mick Dalla-Vee. From self-taught guitarist to frontman for Cease and Desist, Dalla-Vee has also become a busy studio producer, musician and vocalist. He has attained Platinum status for his work on 2010’s Bachman & Turner: Live at the Roseland Ballroom in New York City and has contributed vocals to projects by Mötley Crue and Trooper. Additionally, he has created music soundscapes for such television series as HGTV’s Holmes Makes It Right and is currently writing soundscapes for ITV in both the US and Great Britain.

Artfully mastering the music of Billy Joel is actor-singer Michael Sicoly. He began his passion for music recording jingles for such notable clients as McDonald’s, Shell Oil and Procter & Gamble. Combining his love of music and sports, he can be heard as Anthem singer for the Seattle Seahawks, Seattle Mariners and Seattle Sounders and has sung for the San Francisco Giants, Toronto Blue Jays and Los Angeles Kings in their home stadiums and arenas. Sicoly has also enjoyed a successful acting career including appearances on numerous television series including ABC’s The Commish.

Audience members will be treated to live performances of such Elton classics as “Rocket Man”, “Bennie and the Jets” and “Candle in the Wind” along with a roster of Billy’s chart-topping hits including “Piano Man”, “Just the Way You Are” and “Only the Good Die Young”.