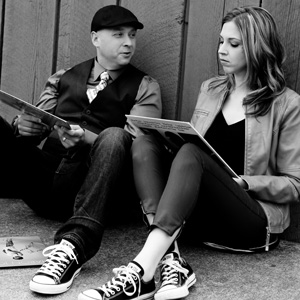 It all began in 2002 at a pub in Manitoba, Canada called Barnacles. Jill chose Lady Marmalade as her karaoke song for that evening’s entertainment as she had once been told by Canadian rock icon Sass Jordan that her voice was as good as Christina Aguilera. That very same night saw Sean and his bandmates scouting new talent for the recently vacated lead singer spot in their band. Unaware that she was being scouted, Jill brought the house down with her powerful voice and her rendition of the uber popular 70’s hit. While the band was initially interested in another singer who was to also perform that night, Sean knew Jill was the one; for the band and for him.

After that night in September, Jill joined the band and from 2002 – 2006 Sean and Jill performed with the Winnipeg-based group Tangle Box. The band saw incredible success in and around western Manitoba and eastern Saskatchewan, playing hundreds of dates in clubs, casinos and corporate events. During this time, Sean studied drumming with the Juno award winning drummer for the Crash Test Dummies, Mitch Dorge.

In 2007 Sean and Jill took the step from being bandmates to being soulmates and headed off into the great unknown a year later relocating to Halifax Nova Scotia. There the two began song writing together and formed a local Beatles tribute act called Rigby. During this time, Jill stepped up her game and began to take vocal lessons with Philadelphia-based vocal coach Owen Brown, whose previous clientele include Celine Dion, Mary J Blige and Wyclef Jean.

2009 saw the duo return to their hometown of Brandon Manitoba and form the funk/dance band Jimmy Legs and The Funk. The band enjoyed local success playing corporate events, music festivals, casinos, pubs, and was handpicked to open for many legendary Canadian rock bands including Harlequin and Queen City Kids.

In 2010 the pair relocated to Victoria BC to begin their journey as husband and wife and to further their career in the music industry.