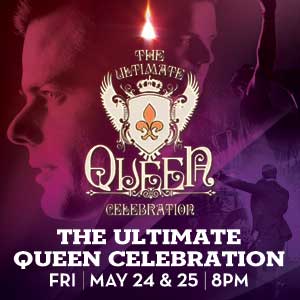 Hand-picked by original Queen band members for the Queen Extravaganza tribute tour, Marc Martel is known for his uncanny resemblance to Freddie Mercury. He first landed the gig after submitting a video of himself singing the 1976 Queen classic, “Somebody to Love”. The clip immediately went viral, amassing more than a million YouTube views within a few days. A media whirlwind ensued with coverage in international media outlets, along with performances on The Ellen Show and American Idol.

Martel spent years recording and touring as the vocalist and primary songwriter for award-winning Canadian rock band, Downhere, before being selected as the face and voice of The Queen Extravaganza. Since then, he has released his own full-length solo album, Impersonator.

Martel returns as the star of the Ultimate Queen Celebration at Hard Rock Casino Vancouver on Friday, May 24, 2019. “That voice. You listen, close your eyes and you think it’s Freddie. It’s really uncanny.” – Roger Taylor, legendary Queen drummer & producer of the Bohemian Rhapsody movie”