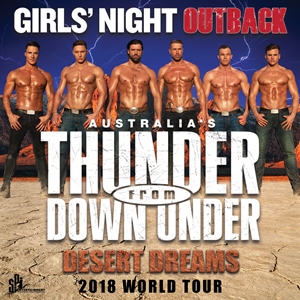 Thunder From Down Under

Australia’s Thunder From Down Under returns to Hard Rock Casino Vancouver on Saturday, April 14, 2018 with their internationally acclaimed all-male dance revue.

After 10 years of touring, this hit show found a home on the Las Vegas strip at the Excalibur Hotel and Casino, where it draws large crowds every night. Since then, the pulse-pounding show has been turning fantasy into reality for millions of women around the world, touring more than a dozen countries. The show features chiseled bodies seductive dance routines, cheeky humor and boy-next-door charm that audiences aren’t able to resist!

Thunder has been featured on television shows such as “The View,” “The Today Show” and “The Ellen DeGeneres Show.” With dynamic dance routines, colourful costumes, state-of-the-art lighting and hilarious acts, Thunder From Down Under is a fully interactive experience that is like no other male revue show in the world.

Tickets go on sale Friday, December 22, with prices starting at $39.50 (plus service charges).