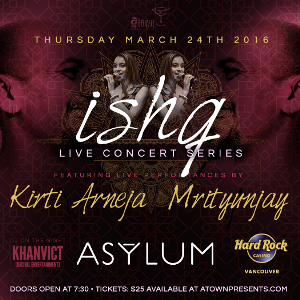 Praised for her flawless voice, Kirti Arneja is a gifted vocalist from Vancouver whose Sufi style adds a special uniqueness to Hindi and Punjabi classics. Kirti has been influenced with all genres of music since her youth, from rock to pop to hip hop, along with Indian classical and Punjabi folk music. Currently Kirti is studying Western Classical music at Kwantlen Polytechnic University in Surrey BC and continuing to captivate audiences with her live performances in and out of school.

Recognized for her flawless solo performances of Hindi ghazals at the Mushtari Begum Festival, Kirti shines in the art of classical music. Kirti has been featured as a solo artist at the BC Children’s Hospital telethon for several years and sang on stage for numerous fundraisers in Vancouver. Her other performances include The Drishti Awards Night gala, The Vancouver International South Asian Film Festival, and Vancouver International Bhangra Celebration City of Bhangra Festival. Kirti has performed for many international superstar’s including Mika Singh, Sonu Nigam, Kailash Kher, Salim Merchant, the late Jagjit Singh and most recently the famous director, Anurag Kashyap