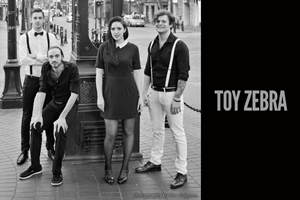 Toy Zebra has been influenced by such groups as Iron Maiden, Megadeth, Muse, The Beatles and The Killers. The band has 3 lead vocalists and tends to do many tunes with 3 part harmony. Despite the youth of the band Toy Zebra constantly dazzles their audiences, always pushing forward testing their limits and abilities. Having begun as primarily heavy metal, their sound has evolved over the past few years to embrace a wider range of songs. Raw, innovative sound with lots of harmony is their passion.

Along with their tear-the-stage-up originals, the band plays a wide range of covers. The band’s set list includes songs from 60′s 70′s 80′s 90′s and 2000′s, band’s such as Poison, Billy Idol, and Van Halen, as well as the more contemporary music of The Killers, Muse, and the Black Keys. Toy Zebra executes these covers with a monster guitar sounds and wicked vocals, making each cover their own.

Each member loves to play and perform but each also is driven to create. Playing clubs affords the band time in the studio to write and record their own original songs and realize their own unique sound.

Toy Zebra creates a sound that is uniquely theirs.