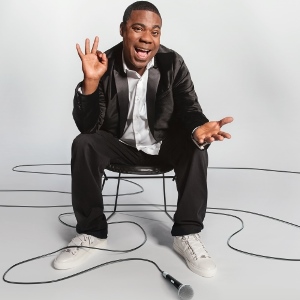 Multi-talented comedian Tracy Morgan will be bringing his just announced Tracy Morgan: Picking Up The Pieces tour to Hard Rock Casino Vancouver on Friday, May 13, 2016.

It was in 1994 when television audiences were first introduced to the New York-born actor and comedian when he played the recurring role of “Hustleman” on FOX’s hit sitcom, Martin for two seasons. He then joined NBC’s Saturday Night Live in 1996 creating such memorable characters as “Astronaut Jones”, “Benny the Bengal” and “Brian Fellows” during his seven-season tenure.

In 2006, Morgan went on to star for seven seasons on NBC’s Emmy and Golden Globe Award-winning sitcom, 30 Rock where he played the wild and unpredictable “Tracy Jordan”. Two years later, he received his first Emmy nomination in the Supporting Actor category for the role. He also earned several nominations for an NAACP Image Award. Additional television credits include his HBO special, Black & Blue and his Comedy Central special, Tracy Morgan: Bona Fide which brought the network one of its largest viewership for a stand-up special in 2014.

He has also been involved in some of the most successful animated films in recent years including the voice of “Lou” in Jerry Bruckheimer’s G-Force (2009), the voice of “Luiz” in Rio (2013) and the voice of “Mr. Gristle” in the Oscar-nominated film, The Boxtrolls (2014). To round out his achievements, he has released an autobiography entitled I Am
the New Black.

After a triumphant return to the Hollywood stage at last month’s Emmy Awards and a visit to his old stomping grounds at SNL, audiences across North America can look forward to the entertainer doing what he does best … making people laugh. “It’s just like falling off a bike and getting back on, that’s all … you don’t forget where the pedals are”, Morgan said on getting back to touring. “People can expect more of what I did before. It’s me … funny plus truth equals Tracy Morgan.”