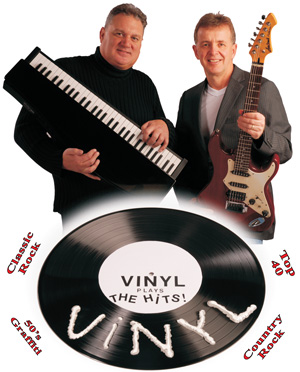 Vinyl is: Gord Oliver – Guitars/Vocals & Dave Fromager -Keyboards/Vocals Gord Oliver is a true working musician. Now with more than 30 years of live stage experience he has defied the odds and actually made a living doing what he loves. The key he says is “to always appreciate the genius of the songs you perform and the artists that made them hits”. Dave Fromager – If playing keyboards, sax and singing isn’t enough, Dave is also a high school music teacher, conductor and composer. Over his varied career he has chalked up numerous TV, radio and film credits. One of his compositions was featured in the 2010 Olympics. VINYL has been performing in the Greater Vancouver area for ten years and counting, living by the the show-biz credo, “Give the people what they want” ROCK N’ ROLL!