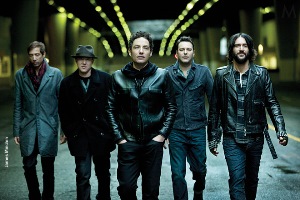 Alternative rockers The Wallflowers are gearing up for a North American tour this summer which will include a date at the Hard Rock Casino Vancouver on Friday, August 14, 2015.

Fronted by co-founder Jakob Dylan, the Los Angeles-based alternative band released their debut self-titled album on Virgin in 1992. After signing to Interscope, they released their second album, Bringing Down the Horse in 1996. The album – which was produced by T. Bone Burnett – featured the hit singles, “6th Avenue Heartache”, “One Headlight”, “The Difference” and “Three Marlenas” and reached #12 on the Billboard 200. It went on to be certified Multi-Platinum.

Additional hits from later albums included “Sleepwalker”, “Letters from the Wasteland”, “I’ve Been Delivered”, “Everything I Need”, “Love is a Country” and “Misfits and Lovers”. The Wallflowers earned two Grammy Awards for “Best Rock Performance by a Duo or Group with Vocal” and “Best Rock Song” for “One Headlight”.
Tickets go on sale on Thursday, March 19 at 10 am and are $54.50, $44.50 & $39.50 (plus service charges). For more information and to purchase tickets, go to HardRockCasinoVancouver.com.