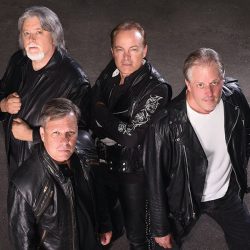 Witchazel is a Canadian rock band that started out of Edmonton, Alberta, led by Sherman Von-Riesen. The band covers groups such as Bon Jovi, Def Leppard, Queen, Aerosmith, Led Zeppelin, Whitesnake, AC/DC, Bryan Adams, Alice Cooper, Billy Idol… just to name a few. Moving their home base to Vancouver, they completed multiple studio projects with their most successful being a project together with producer Ray Harvey (guitarist with Kick Axe). When asked to reform for Tushfest-X in Sept 2018 in Edmonton Canada, the hunt began for “The Lost Witchazel Tapes”. With the help of Ray, the remastering of an album began. The boys are back and ready to rock!