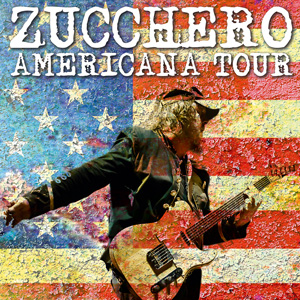 Adelmo Fornaciari was born in Roncocesi on 25th September 1955. He later moved to Forte dei Marmi in Tuscany where, between 1970 & 1978 he formed his first R&B bands: ‘Le Nuove Luci’, ‘Sugar & Daniel’ and ‘Sugar & Candies’. By that time he was already known as Zucchero, a nickname given to him by one of his school teachers.

In summer 2012 Zucchero recorded in Havana ‘La sesión cubana’, an album that features collaborations from some of Cuba’s most important musicians. The album, anticipated by the first worldwide single “Guantanamera (Guajira)”, is produced by Zucchero and Don Was, and mixed by Michael Brauer. ‘La sesión cubana’ combines seven brand new songs with six newly arranged Zucchero hits (“Baila”, “Un Kilo”, “Così Celeste”, “Cuba Libre”, ”Everybody’s got to learn sometime” and “L’Urlo”). The new recordings consist of the first single “Guantanamera (Guajira)”, adapted by Zucchero into Italian, original compositions “Love is all around” and “Sabor a ti”, and covers “Never is a moment”, “Nena”, “Pana” and “Ave Maria no morro”. “Nena” and “Pana” are in Spanish, the second one in duet with the brilliant artist Bebe, and “Ave Maria no morro”, sang in Portuguese, is a duet with one of the most prestigious singers of contemporary Brazilian music, Djavan.

Zucchero describes his new album in his own words: My music, as everybody knows, comes from blues, from soul, from gospel. This project is a trip from New Orleans to Cuba via Mexicali. Latin, Cuban, tex-mex sounds and rhythms melt together dancing. “Hasta l’asta siempre”.