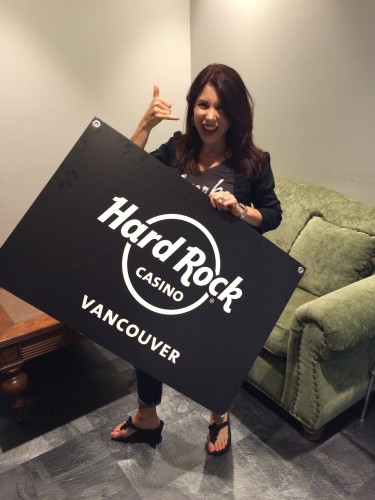 Everything You Go Out For

Wow. What a weekend.

Before we dive in to what went down, we here at the Hard Rock need to give a massive shout out to Stan and Sian Payne. Stan and Sian visited us this week all the way from Wales. They travel around the world to cities with Hard Rock’s to visit them. We were number 144 on their list and honoured to be a part of their ongoing journey. To check out where they have been and their current adventure visit www.paynescape.com/hardrock. We start our weekends on Thursdays. Everyone looks forward to Friday. Not us, we look forward to Thursdays. We know when Thursday comes there is only one more day to Friday and we at the Hard Rock like to start the party early.

To kick start the party on Thursday we had week 9 of our Rock The Mic competition. For those who do not know Rock The Mic is a summer long competition to crown the best of the best in the local music scene. 40 bands and 10 weeks of competition leads into 2 weeks of Semi-Finals (Aug.28 & Sept.4) and the Finals on September 11. To see all videos of past weeks performances hit up www.hardrockcasinovancouver.com/rockthemic. We saw a super diverse pool of talent which ended with Rev winning the week 9 crown over Sound of the Sun and The Timewalkers. Rev mixed covers and originals to get the crowd going and win over the judges. Their covers of Lonely Boy (The Black Keys) and New Orleans Is Sinking (The Tragically Hip) were spot on with tight instrumentals and amazing vocals which reverberated throughout the casino. For anyone looking to start the weekend early and check out some amazing local emerging talent this is the place to be. The last week of prelims is this Thursday at 9pm in Asylum with the last 4 bands battling for their spot in the Semi-Finals. Friday was best described by one word: Insane. In a good way of course. The night was headlined by Slash featuring Myles Kennedy & The Conspirators in The Theatre but featured much, much more.

We kicked it all off with the second of our Summer Patio Party Series. It was jam packed with a live DJ, outdoor BBQ and beer garden. Molson, Andrew Peller and Monster were all on site to keep everyone hydrated and to make sure the party didn’t stop. And it didn’t. That is until the legend Slash was ready to hit the stage. Slash featuring Myles Kennedy & The Conspirators killed it. With an intimate crowd of around 1200 people all on the floor bouncing around to every note it truly was a once in a lifetime show. It is not often you get to be part of such a small crowd and see a rock legend only feet away from where you are standing. Mixing classics like “Sweet Child O’ Mine” and “Paradise City” with new tunes “Stone Blind” and “30 Years To Life” Slash showed the crowd why he has grown to be an icon in the rock world. On top of Slash we cannot forget the amazing performance of Myles Kennedy & The Conspirators. Myles has a one of a kind voice that lends itself perfectly to the mix of new/old tunes and his crowd interaction definitely made peoples nights. Checking The Theatre on Saturday morning we were surprised the roof was still on After that show was done we weren’t. We had metal queen Lee Aaron live in Asylum to keep the party going. She hit the stage around 11pm and kept rocking until after 12:30am. This was a one of a kind experience as those who were there were one of only a few hundred to witness this amazing show with nobody being more than 50 feet away from the stage. Lee proved she can still kick a show’s ass and the crowd loved every minute of it. This put an end to our Friday night but left us going home with the ringing in our ears that is so perfect it constantly reminds you how awesome the night was. Saturday was our first annual Ultimate Car Show. We partnered with 360 Fabrication (www.360fabrication.com) to put on a massive car show which featured over 175 cars, food trucks, beer garden, outdoor BBQ and of course live music courtesy of Jon Bos Band, Best Night Ever and Memphis Beats. All proceeds of this event went to SHARE Family & Community Services (www.sharesociety.ca) and when all was said and done a cheque was cut to the tune of $3,000. We saw some amazing vehicles, enjoyed the sunshine and listened to some great music. All in all it was a crazy weekend. Hopefully you had the chance to enjoy some of the events we had going on. If not, don’t miss out again. Be the story, don’t hear the story. Come see why we are everything you go out for:

Tuesday August 19 – Paint Nite. This unique event allows you to paint like a pro as you follow step by step instructions from an artist and re-create a rock-themed painting. PAINT NITE

Thursday August 21 – Rock The Mic. Take in the final week of preliminary competition and vote on who you think should join the Semi-Finals. Bands include Red Thieves, Straight Up, 24 Seven and Willy and the Rented Mules. ROCK THE MIC

Friday August 22 – Monkey Business live in Asylum. No cover to come check out this cover band that is all about making sure the crowd has fun. MONKEY BUSINESS

Saturday August 23 – The Fever live in Asylum. High energy pop hits cover band that is guaranteed to get you off your seat. Do not miss front-woman Hayley Chase as she belts out todays hits. THE FEVER